If you want to become successful on YouTube then Retention is the key. You got to make sure that your videos are being watched and people are actually watching the videos and they are two ways to look at this. 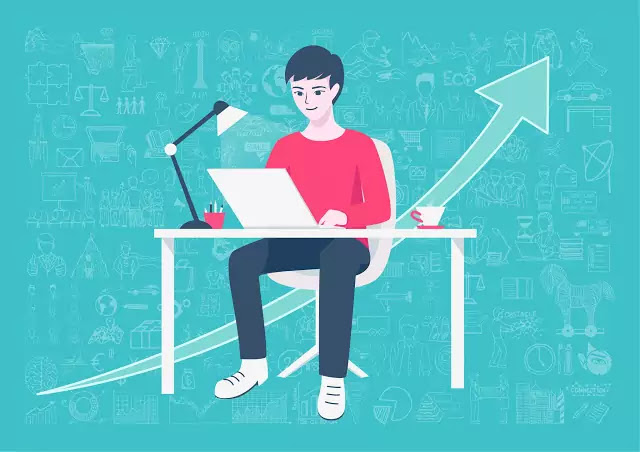 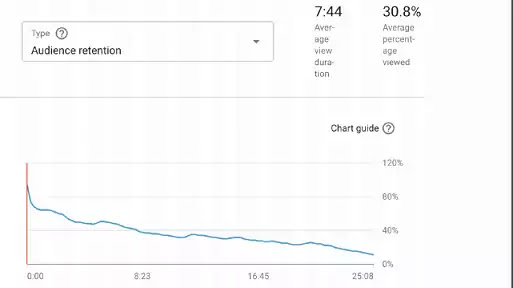 And as far as I know and of course YouTube or Google doesn’t really reveal these secrets. But as far as I know YouTube is interested in both. They’re really interested in of course the absolute amount so that you actually have the absolute amount that is quite high but also at the same time that people are actually in that niche watching your video more than other videos.
So we got to make sure that we improve these two things here in this article.
I would like to give you my best strategies for doing just that.
These are super simple strategies that hopefully will help you to get more people to watch your videos to let them keep watching the video but also to make sure that of course your video ranks higher because of these two factors.
So let’s get started.
We can look at this from two perspectives.
Again there is in your analytics tool on YouTube there’s something called relative audience retention and there’s audience retention.

Relative audience retention is not the same thing as I just explained. This is something that’s quite important. 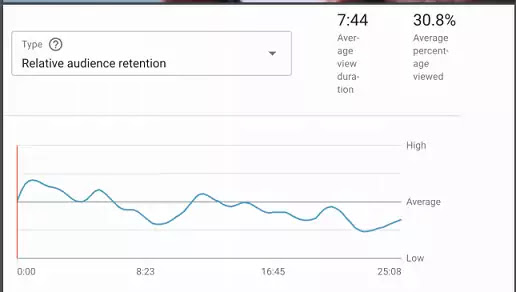 Now it basically means or it basically shows you when people are watching the video the most so for instance in my case this is a video that I made about earning money online and for instance, in the beginning, people are watching that video but then after around let’s say five or six minutes they really start clicking away they don’t really want to watch the video anymore. So there is a huge gap.
A lot of people at that point don’t want to watch the video anymore.
And then there is again a certain point in the video at around I think maybe 10 or 11 minutes where they keep watching the video where there’s more interest in the video and then afterward again the interest is fading a bit.

Now what can we do with that?

Well of course we can analyze what is happening at around 10 minutes(for my video as above relative audience retention). So if for instance you’re right you realize at around 10 minutes you’re talking about this or that topic then maybe create another video about exactly that topic because that is what your audience wants to see.
That is what your audience really is interested in.
And that is an easy way how you can get people to watch your videos and if for instance you analyze these points if you analyze what is happening at around ten to eleven minutes and you create a video about that you, of course, create much better content and more people are going to watch it.
Thus, of course, the average retention rate of your videos is going to increase but also you’re probably going to get more subscribers to watch your video but then also we should look at the audience retention in general so as you can see right here this is the audience retention for the same video and the average duration that people don’t spend on the video is seven minutes and 44 seconds which is actually pretty good.
So what you want to make sure is of course that the retention rate stays kind of consistent in this case for instance. It’s not consistent. It starts off pretty strong.
A lot of people are watching it of course, in the beginning, a hundred percent of the people are watching the video but then it becomes less and less and less.

How can you keep Retention High?

Well there are a couple of strategies.

Make People feel they are in the right place

So lets for instance say you create let’s say some kind of video about making money online then what you could do is in the first video you could say welcome to this video. In this video, I would like to show you how to make money online so that people say all right this is the video that I wanted to watch.

Now Why is this so Important?

Well people don’t really spend a lot of time on your video. They’re probably going to click on the video. They’re going to watch the video for a couple of seconds and if you don’t make a great impression if you don’t talk about what your customer what your viewer wants to see then, of course, the viewer is going to click away and this person is going to look for another video for instance in my case and this is something that you should analyze as well.

Giveaway, dropped somewhere throughout the video

Now Why is this so Important?

Now one strategy that I will reveal here that worked very well for me is a very simple one and that is to make people believe that they are going to get something amazing of course you should give them something amazing for instance what you could say is you could say well there’s a giveaway and I’m giving away let’s say a free coaching hour I’m giving away a thousand dollars worth of courses or I’m giving away an iPad or something like that something that people really want. You got listen to your audience and if your audience really wants, for instance, let’s say some kind of coaching call with you or if your audience really wants some you know some device maybe because that is something you know you’re talking about on your channel then what you can do is you can do a giveaway and say well I’m not going to do the giveaway at the end I’m not gonna tell you in the giveaway is I’m just going to do a giveaway somewhere throughout this video so keep watching the video in order to take part in that giveaway.

Then of course you want to make sure that every single video has a clear structure. For instance when you name your video what you could do is you could name it five strategies to do this or five easy recipes to cook in under five minutes.
So what are people than looking for when they’re watching the video? Well of course they are looking for these five easy recipes. They are going to start with a recipe. Number one they’re going to watch that.If they don’t like it they’re going to continue to two to three and so on and so on.

Now why is why am I explaining that?

You probably could when you create a YouTube video you could be probably saying All right I’m not going to do this I’m not going to give my video clear structure I’m just going to talk about something that I’m passionate about and there is nothing wrong about that But if you want to increase the retention and if you want people to actually watch throughout the entire video then you got to make sure that your viewers know what to expect. Because again the attention span of a lot of people is not very high and if they, for instance, know that they watch recipe number one afterward, of course, follows recipe number two and they have five recipes in this video then they know exactly what is going to happen which is a good thing.

Let the audience take actions during the video

Use these strategies that I just mentioned.
Make sure that you’re looking at the retention rate and if you do it if you use these strategies hopefully it will be higher and if it’s higher your video is going to rank better.
All right.
That was it not here for this article.
Thank you so so much for reading and I hope we can see each other in the next one.